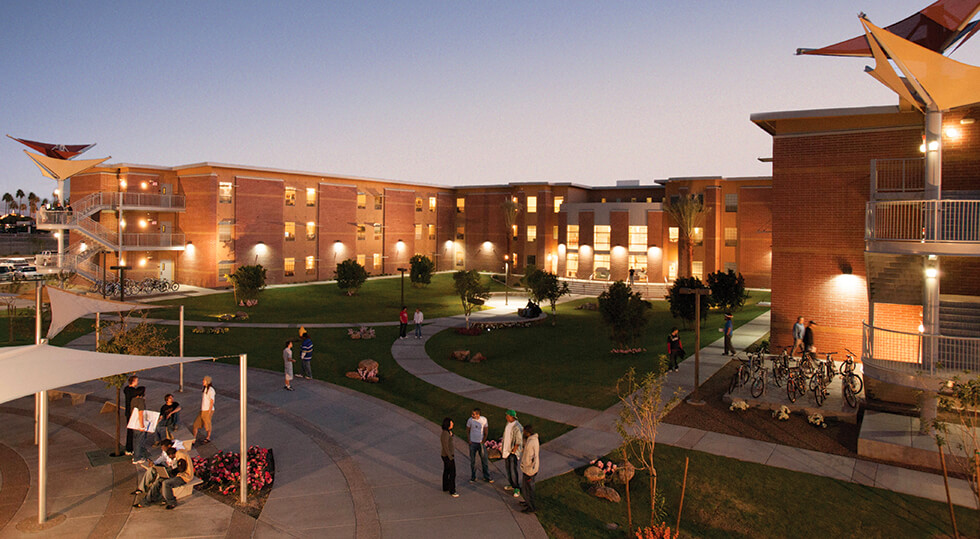 The University of Advancing Technology (UAT) has a rich history founded from humble beginnings to being one of the nation’s rising hi-tech universities. UAT was founded by Dr. Dominic Pistillo and his wife Ann in 1983 as the CAD Institute, where students were trained in computer-aided design and engineering. The college began in a small classroom of ten students in Tempe, AZ. In the 80’s, the founders quickly realized that educating students in emerging technologies had significantly higher leverage so they began working towards becoming a university. Today, the university serves close to 1,000 students and is pioneering unique training in technology education.

By 1990, UAT developed their first bachelor's degree program. At the time, projects included students and faculty building virtual reality worlds where one could sit in the pool of, at the time, unconstructed Bank One Ball Park. The CAD Institute opened its first research center, the Computer Reality Center, in 1992. The Center performed research for the computer graphics industry focusing primarily on virtual reality, which at the time was an ultramodern field. The Center’s attention evolved from applied research to leveraging technology for learning. The founders continued their mission to educate students in technology to innovate our future.

In order to provide this leading-edge education, UAT was granted accreditation in 1992. The school went from a certificate-granting body to a college offering nationally accredited associate and bachelor’s degrees. The CAD Institute changed its name to University of Advancing Computer Technology in 1997 since it was no longer a “tech school.” The name change reflected the University’s broad technology offerings in a collegiate setting. The University also began to build a new campus to house the growing number of students and classrooms.

Construction was completed in spring 1998. The new building featured computer labs, program studios and computing commons outfitted with approximately 300 computer workstations. The building also welcomed a library, café, bookstore and many collaborative work spaces. From 2000-2010, UAT focused their efforts on streamlining their enrollment process and adopted a traditional acceptance model. The curriculum’s rigor and general studies requirements increased to stay current with technology trends. This development also caused the academic center to grow. In 2002, the University made the next incremental change in its name after recognizing that technology is not exclusive to computers. The University officially became University of Advancing Technology.

UAT opened Founder’s Hall in 2007 to house the growing number of on-campus students. The residence hall houses 260+ students and affords creative work spaces, a movie theatre, a fitness center and a game room. That same year, UAT became a candidate with the Higher Learning Commission and an affiliate of the North Central Association, a regional accrediting body for higher education institutions. The progression of the campus also garnered recognition for its Network Security Program. UAT was designated a Center of Academic Excellence in Information Assurance Education (CAE/IAE) as designated by the U.S. National Security Agency and the Department of Homeland Security.

UAT became accredited by The Higher Learning Commission and a member of the North Central Association (ncahlc.com) in 2009. UAT celebrated their 30th Anniversary as an institution of higher education in 2013. Today, UAT continues to grow and is highly regarded as a pioneer with students in computer science, network security, game programming and more with a number of their majors being best of class. The evolution which began in a small classroom to now a university is a testament to the vision of the founders. UAT continues to cultivate and provide education for future innovators.